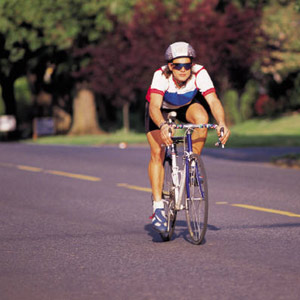 When you’re an avid cyclist, you don’t need to adhere to the strict eating habits society has implemented upon us. You know, rules like, “avoid carbohydrates” or “limit your caloric intake”. While those rules are good for regular folks, they could damage you. As a cyclist, you need all the energy you can get, and that requires a different kind of diet.

Cycling is an endurance-based exercise, so you need to continuously fuel yourself with carbohydrates, protein, and fiber. In order to optimize your body’s performance, you need to nurture it properly during each of the three stages of cycling: pre-ride, during the ride, and post-ride. By eating the right foods during the right stages, you’re giving your body exactly what it needs.

Before a race or a prolonged bicycle ride, your goal is to consume enough energy to keep your body working throughout the ride. The best way to do this is to fuel your body with fiber-rich carbohydrates and lean protein two to three hours prior to the ride. You also want to avoid foods high in glycemic index (GI).

Put the sliced apples, cinnamon, and brown sugar in a crock pot first, and then pour oatmeal and water on top. Do NOT stir. Cook on low heat overnight for 8-9 hours.

Beat the eggs and Parmesan cheese together in a bowl, and set aside. Heat the olive oil in a large skillet over medium-high heat. Cook the zucchini in the hot oil until softened and lightly browned. Season the zucchini with salt, pepper, or garlic powder if desired. Reduce heat to medium, and pour the egg mixture into the skillet. Stir gently for about 3 minutes, and then remove from heat. Keep the skillet covered for about 2 minutes or until the eggs set. (Recipe source)

If you’re riding for more than 90 minutes, it would be smart to fuel your body while on the bike. Your best bet is to eat something readily available that’s high in protein and carbohydrates, like dried fruit or an energy bar. While store-bought energy bars are great, they’re usually packed with sugar and preservatives. You’re better off making your own. Don’t worry – it’s easy!

Preheat the oven to 350 degrees. Lightly oil a 9×3-inch baking dish. Mix all the ingredients in a large bowl until thoroughly combined, and then spread the mixture evenly into the prepared baking dish. Bake for 20 minutes, and then set aside to cool. Cut into 9 bars and wrap with plastic to store. (Recipe source)

When you’re finished riding, your muscle tissues are torn and your body is low on glycogen. At this point, you need to focus on rebuilding your muscle tissues and replenishing your glycogen levels. That means consuming protein and carbohydrates within an hour after the ride.

Instead, continuously replenish your body with food and water, no matter what. Remember to eat foods that are chock full of carbohydrates, protein, and fiber, and avoid sugary foods and baked goods. The more you nurture your body, the better cyclist you will turn out to be!

The AlkaMate water alkalizer is a great way to start making alkaline, ionized water in just 15 minutes while helping to filter out chlorine, sediment, pesticides and organic pollutants.

The AlkaMate also improves taste and eliminates odors. The AlkaMate is your own, portable fountain of youth!

Also learn about our AlkaPitcher– a great way to have pure, alkalized, ionized water on hand all the time!

This is a guest posts from Chiara Fucarino, guest writer for Cruiser Bikes, a new webs hop selling the coolest and best cruiser bikes online.

Our Mission is to help teach others how live a wellness lifestyle that includes regular detoxification and alkalizing of the body for an optimal health experience. While providing quality health information and alternative health-maintenance products to individuals, businesses and health care providers.
Prev5 Tips For Men To Keeping Your Hair Healthier
Does Stress Make You Gain Weight?Next