What is a Vegan, Anyway? 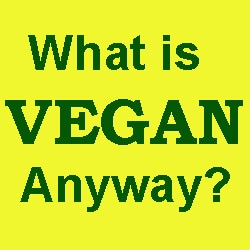 What is a Vegan, Anyway?

What is a Vegan, anyway?

I’ll always remember the day that I decided to go vegan. This is a major life choice for anyone, but it was even more drastic for me. I grew up in a family of hunters in West Virginia and, I’m ashamed to admit, steak was one of my favorite dinners. I had never heard of a vegan until I opened up one of my mom’s magazines to an article about them.

This was not a reputable magazine. It was a women’s magazine that had a new fad diet in it every week. The article about vegans was, of course, targeted at the weight loss benefits of a plant based diet. It exclaimed, “All of the women in Britain are doing it! And you know they’re all skinny!” As obnoxious as it was, I’m thankful for that article. I immediately logged onto the computer and started searching for more information. I soon found that there is a whole lot more to being vegan than losing some weight.

There are as many types of vegans as there are reasons for being one. At the core, a vegan is defined as a strict vegetarian who consumes no animal food or dairy products. Some types of vegans go beyond this and do not use leather, wool, fur, or silk. Many people come to veganism for health reasons.

Either they have been diagnosed with a chronic disease such as cancer, diabetes, heart disease or they are obese and want to lose weight. Some people find that they simply feel better as a vegan. Then there are the ethical vegans. Ethical vegans abstain from animal products because they feel that it is wrong to use them or because they feel that animals are being exploited by the current food system. Environmental vegans are a relatively new type who have decided to be vegan based on the environmental impact of raising animals for food.

There are many vegans, such as myself, who fall into multiple categories. As I researched on the internet, I ran into undercover videos of animals being abused in slaughter houses. These videos pushed me to my decision to become a vegan. Around the same time, I had become fatigued and gained 40 pounds on my normally thin frame. I discovered that I had hypothyroid disease.

Through being vegan, taking thyroid hormones, and adding in exercise I lost the weight plus more. I also felt better than I had in my entire life. I not only cared for the animals but I also enjoyed the health benefits of veganism. A couple years later, I learned about the environmental hazards of factory farming and raising animals for food. I now consider myself an ethical/health/environmental vegan.

If any of these issues ring true with you, consider giving veganism a try. For you, for the animals, for the earth.

The AlkaPitcher water alkalizer and ionizer is a great way to start making pure, alkaline water instantly while helping to filter out chlorine, sediment, pesticides and organic pollutants. The AlkaPitcher also improves taste and eliminates odors.

The AlkaPitcher is the next revolutionary product helping everyone drink pure, filtered alkaline water!

If you want your pure, alkalized and ionized water on the go, learn more about AlkaMate – the portable water alkalizer, purifier and ionizer!

Our Mission is to help teach others how live a wellness lifestyle that includes regular detoxification and alkalizing of the body for an optimal health experience. While providing quality health information and alternative health-maintenance products to individuals, businesses and health care providers.
PrevThe Importance of Alkaline Water
Planting Your Own Vegetable GardenNext

4 thoughts on “What is a Vegan, Anyway?”